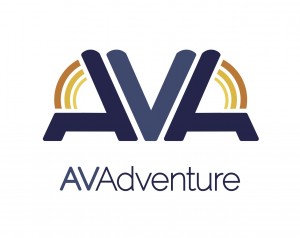 AVAdventure is proud to be an Associate Member of the National Association for Campus Activities, providing unique headphone events to college audiences.  AVA provides a variety of headphone events for campus entertainment, educational, and orientation events.

The Headphone Time Travel Dance Party Adventure combines the excitement of a 2 DJ silent disco with unique, interactive party games in an event that takes place all over campus!

Here’s how it works – participants arrive at a starting location and receive a wireless headset, with the ability to switch between two stations. Then two hosts – each outfitted with a mobile broadcasting unit – take players on a ridiculous time travel adventure where the players make choices based on how they want to experience the games, story, and dance party.

Players can use the channels on their headset to switch between hosts and dance party decades in time during the show – competing in games and working together on challenges. The program is completely mobile, and is designed to be experienced all over college campuses – with new scenes, challenges, and dance parties taking place on the go.

We bring the headsets and two DJs for an interactive comedy/game program topped off with a two-channel silent disco dance party.  It’s a unique show perfect for late night, comedy night, or orientation programming.

In the comedy and game shows, all players get a two-channel headset to interact with the performers and each other.  The games are customized for all events, and include social mixers which rapidly introduce players to each other and headphone improv comedy with tons of audience interaction!

After the games, the lights go out and a two-channel, two-DJ silent disco takes over.  If desired, the playlists can even be customized to your event: modern VS throwback, DJ VS request, 80s VS 90s, or any other genres to match the theme of your event.

All of this – the comedy/game show, dance party, lighting, gear, DJs/hosts, headsets, and customizable elements – come bundled in this single program.

Code Blue was a custom AVAdventure created for Homecoming Week at Lawrence Technical University in Southfield, Michigan. A cast of actors led the student body on a quest to save their campus mascot from the captivity of a wild class project come-to-life through an interactive celebration of campus history, culture, and organizations.

Along the way students used one of alumnus John DeLorean’s iconic vehicles to travel back in time to meet their university’s founders, competed in a frantic multi-sport competition, and snuck into the dining hall after hours for a pick-me-up snack from a beloved professor. In the end they used a brand new campus fight song, two basketball teams, and a dance squad to defeat the villain and save the day.

During the event, students used their phones to listen to a prerecorded audio adventure as they danced through the city streets with a lively cast of characters. Along the way they learned about special promotions and met business mangers and mascots, interacting directly with the sponsoring brands and products.

Participants also signed up for prizes via social media accounts during and immediately following the event, resulting in notable overnight follower increases for the Facebook and Twitter accounts of event sponsors.


This week-long experience set around a community “ArtVenture” gallery featured live performances culminating in an interactive heist. Blending elements of digital media and staged performance, the Heist AVAdventure and ArtVenture gallery programming blurred the lines between reality and fiction in a one-of-kind artistic event.

On the night of the big event, all players viewed a video briefing from the heist mastermind outlining key players and specialties before picking one of four crews to team up with for the night: the tech team, stealth team, rookie crew, or diversion squad. After downloading their team leader’s audio files, players embarked on an epic night sneaking past security guards, dodging lasers, and battling an unexpected villain.

This live event was the culminating production in a one week celebration of the arts. In establishing the world and locations for the event, the AVAdventure team opened an ArtVenture gallery, constructing walls within a community space, and curating a gallery of paintings, drawings, metalwork, sculpture, photography, computer art, digital installations, and glasswork.  Works from professional artists were displayed alongside art from college students, grade school students, hobbyists, and inmates from a local prison art program; a wide spectrum of the local arts scene was brought under one roof, uniting local art demographics in a shared space.

The gallery also featured a series of events, including an opening night reception and a wide array of spoken word, film, and musical performances throughout the week: romance novels, Celtic dance, stand-up comedy, children’s literature, experimental rock, slam poetry, and much more came to life in the ArtVenture space.

During this gallery and performance run, fictional characters and story elements from the pending heist interrupted the proceedings.  The fictitious gallery curator welcomed patrons alongside the City of Williamsburg’s mayor and arts speakers, and the fictitious inmate heist mastermind caused confusion during public events.  Online video diaries and ominous PSA announcements leading up to the final heist event also added to the story world, building anticipation. 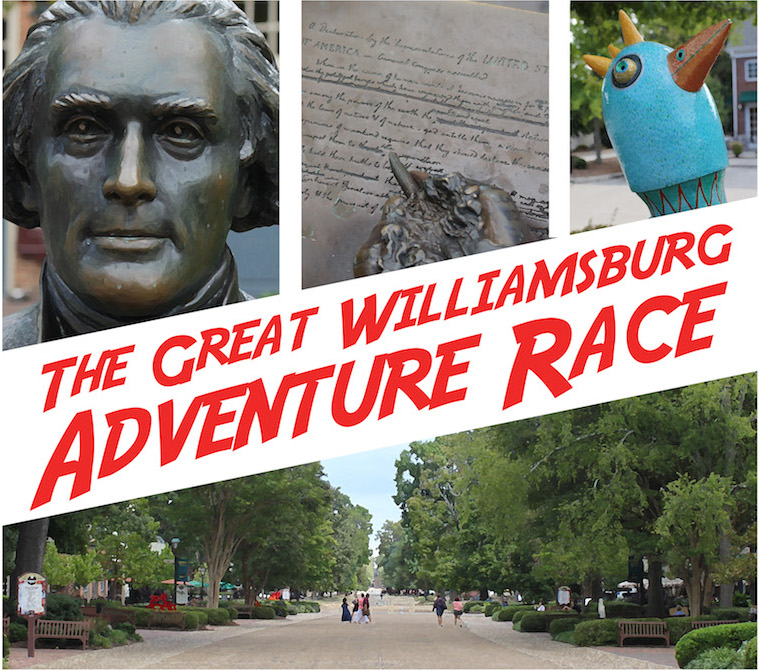 The Great Williamsburg Adventure Race was a custom event designed for the City of Williamsburg, Virginia to introduce new college students, returning students, and members of the community to local facilities and businesses through a unique competition.

Teams raced through three areas of the city – the arts district, downtown square, and public library neighborhood – solving riddles, snapping pictures, and completing physical challenges. AVAdventure worked with local businesses to create custom challenges to engage teams including taking the stage before an audience at musical venue, facing off in a laser tag showdown, and contributing to a collaborative work of art.

The top three teams in the race were a cross-generational family including a grandmother and her granddaughter, a crew of college freshmen, and a group of soccer moms.